2018 Siouxland Chamber of Commerce An...
Register 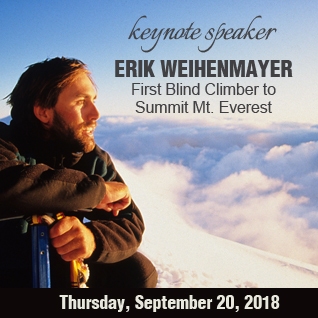 Despite losing his vision at age 14, Erik Weihenmayer is an accomplished climber, paraglider, skier, and kayaker who never allows blindness to interfere with his passion for pursuing an exhilarating and fulfilling life.  Erik brings a powerful message about harnessing the power of adversity as fuel for greatness, emphasizing the importance of building a strong "Rope Team" and illuminating how to develop a "No Barriers Mindset."

Limited tiered sponsorships are available for premium seating on a first come, first served basis.  If you are interested in sponsorship contact Katy Karrer. Download a paper registration HERE.

In 2001, Erik became the first blind person in history to reach the summit of Mount Everest.  In 2008, he completed his quest to climb the Seven Summits - the highest point on each continent.  This accomplishment closed the circuit on a 13-year journey that had begun with his 1995 ascent of Denali.  He is joined by a select company of only 150 mountaineers to have accomplished the feat.

Shortly after his summit of Everest, he was honored with a Time magazine cover story detailing his conquest of the world's highest peaks.  Since then, he has authored muliple books including his memoir, Touch the Top of the World.  Yet, for those who had long known him, his propensity for taking on and knocking down the loftiest of challenges came as no surprise.

Even as retinoschisis began to rob him of his vision by the age of 14, Erik resisted the idea that blindness would sweep him to the sidelines of life.  He established himself as a formidable wrestler in high school, representing his home state of Connecticut in the National Junior Freestyle Wrestling Championship in Iowa.  As a teenager, he discovered rock climbing as well as a natural dexterity for the tactile aspects of scanning rock with his hands and feet for holds.

Through his groundbreaking adventures around the world, he has explored and defined what it means to live a "No Barriers Life," describing it as a map we build to navigate and to pursue a life that matters.  Central to this journey is a mindset to continually challenge ourselves to grow and evolve - in Erik's words, to "climb" while others "camp."

Erik's inspirational speaking career has taken him around the world, and his powerful message of overcoming adversity is sure to be memorable here in Siouxland.